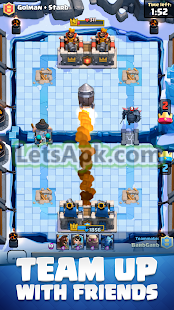 Build a deck and start the fun.

As usual, the SuperCell company has returned with a legendary game with its famous characters in the game Clash of Clans • The idea of the game depends on building a group of playing cards where each card is the character of a hero who can be fighting with them on the battlefield

The battlefield consists of two parts in each section there are two towers and a castle and in this castle there is a king defending the castle and there are two roads the player must enter one of the roads using a hero cards and destroy the opponent’s towers to destroy the castle
The player who destroys more towers during the specified time period is the winner in the event of a tie. There is a short extra time at the tie then the result is then a draw.

All rights reserved To SuperCell And Read DMCA Disclaimer
for reporting any infringement send me a notice via email to : [email protected]
Download Page