Mobile War Robots is a real-time action game that has the power to play as a team of 6 people. War Robots is a game designed and built by the famous company Pixonic LLc for iOS and Android , which has made a huge success with its unique gameplay! Join the Iron Guild of Fighters now!

16 types of war robots with different powers
More than 20 different types of weapons such as ballistic missiles
Weapons like energy and plasma The
ability to combine weapons and robots
Ability to build a war machine with your taste and style of play
Build a strong and brave robot to unite with other teams
Ability to join a team To fight against other teams around the world,
complete the military missions to get rewards and the title of best robot racer


Riding Robot War Case! Are you ready for surprise attacks? This game includes many complex tactical maneuvers as well as interesting tricks for you! You must destroy all enemy robots and upgrade your combat equipment and weapons by plundering their valuable resources and equipment, to increase the fighting robots’ ability, speed and power. Prove your strength in various maps and maps and win unique strategies and tactics!

Choose your fighter. Over 50 robots of unique designs and powers allow you to discover your own style.
Play your own way. Want to smash and destroy? Or do you want to save and protect? Or do you just want to annoy your enemies? You can do it all thanks to a wide range of weapons including, ballistic missiles, plasma cannons and giant guns!
Personalization. Each robot can be equipped with weapons and units of your choice. Choose what you like and show everyone your potential!
Fight in Collective Mode. Collaborate with other people! Join a powerful group to find trusted partners (and friends!) Or start your own!
Fight alone. Do you prefer to play alone? Lone wolves can prove their abilities in special modes like Arena or Free-for-All!
Explore our world. The world of War Robots expands and evolves with every update and our growing community is always ready to help you.
Are you looking for more excitement? 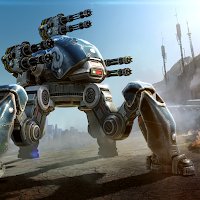