Subway Surfers is one of the most entertaining, action-packed and challenging adventure games that has won wide popularity throughout the world among all ages.

The gamecontains several stages and in each stage of this game the adventure is in a different country from the previous one, which made it more entertaining.

The idea of ​​the game Subway Surfers is based on the idea that a naughty boy named Jack writes on the walls of the trains, making the policeman run behind him and chase him so that he continues to run and avoid colliding with anything in front of him until he is not arrested, and during the run he collects the largest amount of money and other individual rewards .

The game is characterized by amazing graphics, high quality, visual and audio effects, and great music, and after you earn a lot of money, you can choose and change the naughty boy Jack to other characters, which makes the game diverse and so you will not be bored.

Subway Surfers has the following features: 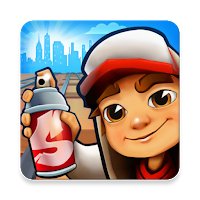